Videos on How to Do EFT

In the original EFT, 13 of the main 14 meridians (energy lines) that run through the body were used. The 14th meridian (Liver meridian) was excluded simply because of its location on the chest. Its location made it difficult for many women to access. Around about 2004, the new shortened process came into use. The three points he used were the: Top of the Head Point; Wrist Point and Ankle Point (please note as a precaution the ankle point is not used by pregnant women). Around about 2004, the new shortened process came into use. The shortened process  uses 7 of the 14 meridians. These points were added by many people using EFT. They were however seen as optional points. Currently most therapists use the top of the head point and the shortened process together. The finger (from original EFT) and wrist points (from Michael Gandy) are often used in conversational EFT. Practitioners will often tap on the finger and wrist points whilst holding a conversation and discussing the problem. Conversational EFT is an informal way of beginning to “take the edge of intensity” off of a problem. It is also a great way of subtly reframing or helping a person gain a new perspective on their issue.

How to Do EFT

EFT consists of two stages, this is called a round of EFT. These are:

Click on the link above to go to a page with simple detailed instructions on how to do EFT Tapping. This page is illustrated with an Tapping Points Chart. 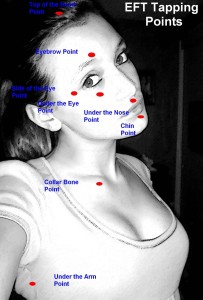