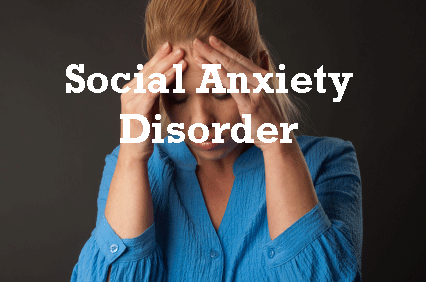 What is Social Anxiety Disorder?

Social anxiety disorder (also called social phobia) is the fear of being rejected or embarrassed in certain social occasions such as going for an interview or delivering a speech in public. A feeling of nervousness or a state of hesitation on such occasions is perfectly natural, but this anxiety problem is far more intense than that simple butterfly feeling. People suffering from this chronic mental disorder feel highly uncomfortable in public. They are afraid of being watched, judged and criticized by the people in their surroundings.  A strong feeling of anxiety and self-consciousness overwhelms their personality as soon as they get into public, and this is why they always try to avoid places and gatherings where they think they might have to interact with people.

This anxiety problem is also called social phobia is a very common problem. It is equally prevalent among males and females of all age groups. Statistics reveal that between 7 to 8 percent of Americans suffer from social anxiety disorder which is a huge proportion. However, the causes and symptoms of the it may vary drastically from one person to the other.

A simple feeling of nervousness or shyness does not indicate the presence of it, but a constant state of anxiety, fear and self-consciousness may indicate an alarming situation. With this anxiety problem, you can’t get rid of the feeling of nervousness even though you realize that the social situations that you are in is not too ugly for you to handle. For example, you may constantly try to make yourself believe that speaking in public (public speaking anxiety) is not too difficult for you, but somehow you can’t overcome your fear of being embarrassed.

This anxiety problem  affects your behavior, emotions as well as your physical health. Some of the most frequently observed symptoms of social phobia are as under:

Like other mental health conditions, the causes of social phobia can not be predicted very well. They can very from person to person; however the causes observed in most of the cases are a complex mixture of genes and environment. Some of the causes are:

According to the medical science research, more than 70% of a human’s behavior is governed by the environment in which they grow in their early childhood. In many cases, it has been observed that people who suffer from bad experiences in the first 6 to 7 years of their life are more likely to develop social anxiety disorder. Children who experience bullying, negligence, strong criticism or sexual abuse have greater tendency to experience social phobia in the years to come.

Some therapists and doctors claim that social phobia arises due to an imbalance in the human brain’s chemical structure. This imbalance can occur naturally by birth or it can be produced over time due to your mind’s learned behavior. (Your emotional state and your beliefs naturally affect the brain chemistry – “chicken and the egg phenomena”:-)) Also it is important to point out that prior to birth experiences can have an impact on our emotional state and belief structure. The period in the womb is important.

There are also evidences that this anxiety problem  is a hereditary disease. In many cases, it has been reported that this type of disorder runs in families from grand parents to parents and then to children and so on to their next generations. When issues are classed as hereditary people often conclude that they are “set in stone” and that their occurrence is unavoidable – this is incorrect. Our beliefs hold great power over our physical and emotional states. Science is now finding evidence that supports this. This leads to the obvious conclusion, that if you change your beliefs you can change your physical and emotional states therefore releasing yourself from the hereditary element of this problem.

Some people believe that social phobia can not be cured. This is not true. There are treatments for social anxiety disorder that are quite simple yet effective. The most widely used treatment methods include:

Most of the doctors recommend the use of antidepressants and relaxants as the treatment of social anxiety disorder. These medicines can overcome the problem quickly; however they produce extremely dangerous side-effects especially when used for longer periods of time.

Cognitive behavior therapy is a type of therapy technique that is commonly used for social anxiety disorder – Read the research below. Techniques such as EFT (Emotional Freedom Technique) therapy and Inner RePatterning therapy can also be help in the treatment of social phobia.

Interesting article that shows that long term research does not support the idea that Cognitive Behavioral Therapy is the most effective form of treatment for this problem. It was found to be no more affective than other forms of therapy.

EFT and The Power of Reframing